‘Affordability is becoming a headache for homebuyers’ 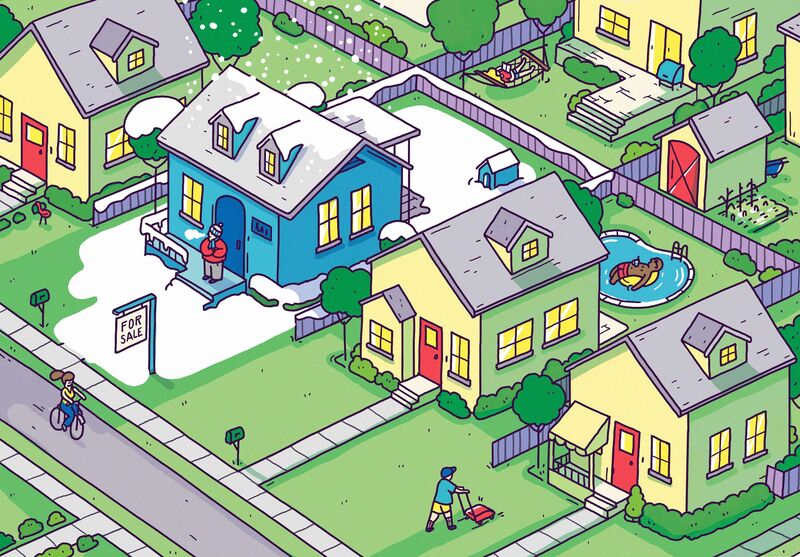 They were fed up with Seattle’s home bidding wars. They were only in their late 20s but had already lost two battles and were ready to renew with their landlord. Then, in May, their agent called.

Suddenly, Redfin’s Shoshana Godwin told the couple, sellers were getting jumpy, even here in the hottest of markets. Homes that should have vanished in days were sitting on the market for weeks. There was a three-bedroom fixer-upper just north of the city going for $550,000, down from more than $600,000. They made the leap in early June and had closed by the end of the month, for list price.
The U.S. housing market — particularly in cutthroat areas like Seattle, Silicon Valley and Austin, Texas — appears to be headed for the broadest slowdown in years. Buyers are getting squeezed by rising mortgage rates and by prices climbing about twice as fast as incomes, and there’s only so far they can stretch.

“This could be the very beginning of a turning point,” said Robert Shiller, a Nobel Prize-winning economist who is famed for warning of the dot-com and housing bubbles, in an interview. He stressed that he isn’t ready to make that call yet.

A slew of figures released this week gives ample evidence of at least a cooling.

Existing-home sales dropped in June for a third straight month. Purchases of new homes are at their slowest pace in eight months. Inventory, which plunged for years, has begun to grow again as buyers move to the sidelines, sapping the fuel for surging home values. Prices for existing homes climbed 6.4 percent in May, the smallest year-over-year gain since early 2017, and have gained the least over three months since 2012, according to the Federal Housing Finance Agency. Shares of PulteGroup Inc. fell as much as 4.9 percent Thursday morning after the national homebuilder reported that orders had declined 1 percent from a year earlier, blaming rising mortgage rates.

“Home prices are plateauing,” said Ed Stansfield, chief property economist at Capital Economics Ltd. in London. “People are saying: Let’s just bide our time, there’s no great rush. If we wait six or nine months we’re not going to lose out on getting a foot on the ladder.” That means “we’re now looking at a period in which prices move more or less sideways, or increase no more quickly than growth in incomes, over the next few years.”

Stansfield projects a 5 percent gain this year and a 3 percent increase in 2019. That compares with 10.7 percent in 2005, shortly before the crash.

Some of the most expensive markets, where sales are falling under the weight of prices, are now seeing substantial increases in supply, according to Redfin Corp. In San Jose, California, inventory was up 12 percent in June from a year earlier. It rose 24 percent in Seattle and 32 percent in Portland, Oregon. Those big jumps are from low numbers, so the housing crunch is still a serious problem.

Dustin Miller, an agent with Windermere Realty Trust in Portland, said he’s trying to manage sellers’ expectations, something he hasn’t had to do since the end of the last housing boom. One customer, a baby boomer moving to a new home across the state, expected to have buyers fighting over her house. She got one bid, below her asking price.

“Buyers want to shop and take some time, as opposed to having to rush and throw offers in,” Miller said. “It’s the market correcting itself. At some point, you hit a peak of momentum, and then things level off.”

This new wariness was noticeable in the latest consumer-sentiment data from the University of Michigan. In its preliminary July survey, 65 percent of Americans said it’s a good time to buy a home, the lowest since 2008, when the economy was still in recession.

Still, market watchers note that the housing sector has strong support from a healthy labor market and steady economic growth, which indicates a stabilizing trend for home prices rather than anything close to the experience of the crisis, when property values plunged. And shares of D.R. Horton Inc., which builds a lot of starter homes, rose as high as 8.7 percent Thursday morning after the company reported a 12 percent jump in orders.

“The rate of home sales, new and existing, has probably peaked,” said Ian Shepherdson, chief economist at Pantheon Macroeconomics. “But it’s not going to roll over. It will gently decline.”

The homeownership rate in the second quarter was 64.3 percent, up from 63.7 percent a year earlier, according to U.S. Census Bureau data released Thursday.

“While there appears to be a slowdown in the growth rate of home sales and prices, it has not slowed rising homeownership,” Freddie Mac Chief Economist Sam Khater said in a statement — though he added that the rate is a full percentage point below the 50-year average, reflecting “the long-lasting scars from the Great Recession and the lopsided nature of this recovery.”

S&P CoreLogic Case-Shiller data hint at the softening. The 20-city index of property values rose 6.6 percent in the 12 months ending in April. After seasonal adjustments, the gauge posted its smallest monthly increase in 10 months, with New York, San Francisco and Washington reporting declines.

Homeownership still remains out of reach for many Americans, especially for first-time and younger buyers. For existing homes, the median price climbed in June to a record $276,900, while properties typically stayed on the market for 26 days, unchanged from the prior three months, according to the National Association of Realtors.

“Affordability is becoming a major headache for homebuyers,” said Lawrence Yun, the association’s chief economist. “You are seeing home sales rising in Alabama, where things are affordable. But in places like California, people aren’t buying.”

In addition, “no one knows how far and how fast” borrowing costs may rise as the Federal Reserve raises interest rates, Stansfield said. Lenders and borrowers alike are less likely to let credit spiral out of control than in 2005 and 2006. And with financing tighter and wage gains in check, “there’s not much scope for prices to continue to increase sustainably” at recent rates, he said.

The cooling, in turn, could curb housing starts, “because builders tend to only build what they think they can confidently sell,” Stansfield said. At the same time, he said, “it will decrease the risk of a bust.”